Latest profits for the computer giant Apple beat hopes, including a higher-than-expected rise in iPhone sales. 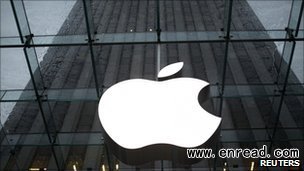 The last year has seen a huge rise in sales of Apple's iPhones, but iPad sales disappointed

The figures are the latest in a string of good results from the US's technology companies.

Intel's figures, released on Wednesday, were also well above hopes and helped share prices to a three-year high.

Sales of the company's computers were strongly higher, up by 28% from a year ago driven by its tweaked MacBook .

Apple's figures were not uniformly positive. It sold 4.69m iPad tablet computers in the quarter, below expectations.

Another disappointment was sales of its one-time star, the iPod, down by 17% on the year at 9m units.

Most were enthusiastic about the figures.

Channing Smith, （公文包，文件夹） manager at Capital growth fund, said: " numbers across the board. The only （打嗝） is lower than expected iPad numbers."

Apple chief executive Steve Jobs said in a statement: "With quarterly revenue growth of 83% and profit growth of 95% we're firing on all （汽缸，圆筒） ."

Mr Jobs, who went on medical leave in January with an undisclosed illness, continued: "We will continue to on all fronts throughout the remainder of the year."

The day-to-day running of Apple is currently being done by chief operating officer Tim Cook.

The Australian dollar rose to a record high against the US dollar as producer prices beat forecasts, indicating that inflation pressures are still strong. 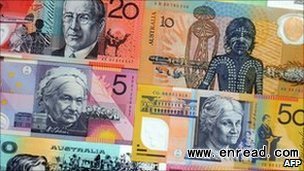 It climbed to .0764 in trading on Thursday, the highest since the currency was freely floated in 1983.

Producer prices in Australia climbed 2.7% between January and March from the previous year, said the Bureau of Statistics.

say interest rates could be set to rise.

The Reserve Bank of Australia has kept rates unchanged since November at 4.75%.

"Core inflation pressures are more likely to be drifting higher over the coming couple of years, and thus some future moderate rate hikes are appropriate," said Scott Haslem from UBS.

However Australia already has a high interest rate compared with other developed countries.

Further hikes would likely cause investors to put their money into Australian markets.

"Given the wide interest rate differential between Australia and other developed economies like the US and Europe, investors can earn greater yields on Australian assets," said Matthew Circosta of Moody's Analytics in Sydney.